Do Not Ice an Injury

“Seriously, do you honestly believe that your body’s natural inflammatory response is a mistake?”
Dr. Nick DiNubile, Editor in Chief, The Physician And Sports Medicine Journal

After an injury, the first thing you were probably told was to get some ice on it. You sprained an ankle? Ice it… Your knee hurts? Ice it… Shoulder pain? Ice it. You get the idea…

So, let’s take a look at what ice does well and what it does NOT do well. As you will see, it turns out that ice can actually do more harm than good to your body and new studies back that up!

First, let’s start with the good news… Ice helps with short term pain relief. TRUE! Simply put, ice makes the area go numb, which reduces the pain for a little while. That’s why trainers started using it in the first place. In the 1960s, when athletes got hurt and came to the sidelines, they needed something quick and easy to treat them. So, they stuck some ice on them and it seemed to help.

From that point on, we took a big leap of logic… We thought, if it numbs the pain, then maybe it also helps heal the injury. But, all the studies are pretty clear on one important point. Ice does NOT heal an injury. In fact, research shows that ice does the exact opposite… it sabotages the body’s natural healing response to an injury and can cause long term damage. Let’s get into it… 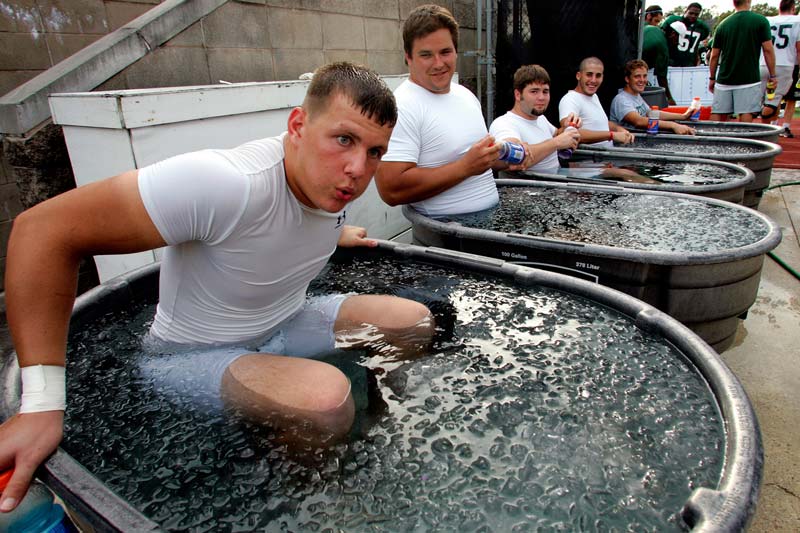 Ice has become such a part of the athletic world that even suggesting ice may cause harm makes people angry. What about the inflammation? What about the swelling and bruising? As it turns out, the best thing to do is support and encourage the body’s natural healing process. And as you will see, ice stops that natural process every step of the way. And that’s bad news if you want to get out of pain and heal yourself. Here are the 3 stages of healing and a quick overview of how ice sabotages it:

#1 : Inflammation – When you get injured, there will be all kinds of damage and trash in the injured area. So first, your body has to deal with all that junk… And, in addition, your body does not want you to move, because that could make things worse. So, your body wants to remove the debris and waste and also, it wants you immobilized. Inflammation is the perfect solution. It stops you from moving the area and isolates the debris for safe removal. The worst thing you can do at this point is ice the area to reduce the swelling. That STOPS the body’s natural healing response. (more on this below…)

#2 : Repair – After the initial response to immobilize the injured area, the body immediately begins the repair process. It activates the immune system to send in powerful immune cells including Macrophages. Now, Macrophages are incredible, because they literally gobble up the debris and remove it form the body. The body floods the injury with Macrophages in the first 48 hours. Now, guess what? In studies, they found that ice STOPS the flow of Macrophages (hint- that’s bad)!

#3 : Remodel – The last stage of the healing process involves fully healing the injured area and getting it back to the way it was before. So, among other things, the body sends in a second wave of Macrophages after the first 48 hours and they release the hormone IGF-1 (responsible for healing damaged muscle). But, if you’ve been icing the area, you will stop that flow of Macrophages too (that’s really bad)! 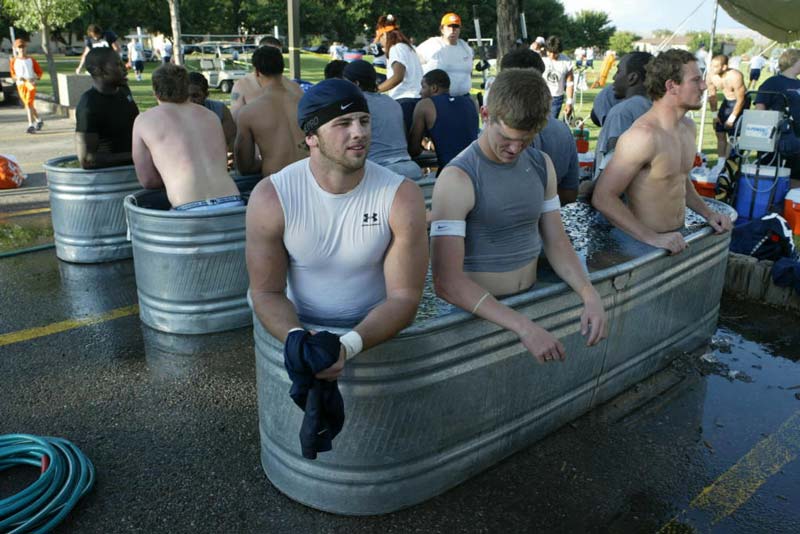 The National Athletics Trainers Association found that ice was an over-simplified method and NOT effective at speeding up the healing process. “The inflammation process assists in healing. We don’t want to interrupt that”, says Tom Kaminski, the lead on the study.

Researchers found that when muscle tissues cool from icing the skin, blood vessels constrict and shut off the blood flow that brings in healing cells. After the ice is removed, the blood may then return, but the blood vessels may not open for many hours after the ice application. This research team found that this can cause the tissue to die due to lack of blood flow. It can also lead to temporary or permanent nerve damage and disability in the individual or athlete. Therefore, ice application does not boost recovery after exercise and can instead cause tissue and nerve damage.

When muscles and other tissues are damaged, your body sends inflammatory cells to the damaged tissue to promote healing. Inflammatory cells rush to the injured tissue to start the healing process. Topical cooling, a commonly used clinical intervention, seems to not improve but rather delay recovery from eccentric exercise-induced muscle damage.

After an injury, the immune response can last for up to 1 week… Since, ice reduces the levels of IGF-1, we would expect to see muscle regeneration slow down. Therefore, it is no surprise that a recent study concluded that ice appears to delay the return to normal of muscle damage markers. Put together, these results indicate that using ice on an injury disrupts the body’s normal and healthy response.

FacebookTwitterRedditLinkedInTumblrPinterestVkEmail
Page load link
Get ALL our programs   ALL ACCESS